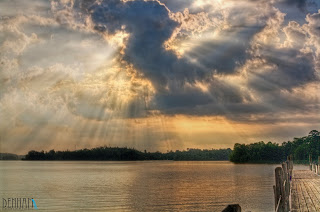 One of the great things about having this blog is having a new avenue to post my images. Most of my Facebook friends have seen some of these shots like the one above, but I get to share them with new groups of people that haven't. I also get to share my insight as to the conditions and reasoning for taking and/or stumbling upon these shots.
Unlike my brother, Jim, I don't delve into HDR photography that often. This is due to a couple of reasons. 1) I don't have and haven't yet been able to purchase a good HDR software. I do have a free downloaded software, but it is not as versitile as some of the more well known softwares out there. 2) I tend  to try and make the shot I take stand on it's own with minimal post processing. This doesn't mean that I don't like or appreciate HDR, but for lack of better terms, it just isn't my "thing".
Jim, however, has become quite good and well known at it. Visit his sight here to see some his fantastic work.  The image you see above is a result of  Jim taking 3 of my shots and performing his magic for me.
During the summer I have a much easier time of getting morning shots because my kids are on summer vacation and the only person I have to worry about getting ready is me.
One morning in June, I was a little lazy in the fact that I didn't get up and ready early enough to catch the golden hour light. When I did make it to work, though, the clouds and sun were putting on an incredible display. Needless to say, I immediately pulled out the camera and tripod and set up by our old dock.
I fired off several shots at different exposures. When I viewed the shots on my computer, the shots that were exposed properly for the light blowing through the cloud were underexposed for the dock and trees across the cove. And vise versa for the shots that the dock and trees were in good exposure.
Later on that morning I gave Jim a call and asked for his help. I he had me email him 3 shots, one exposed for the sky, one for the dock, and one as close to in between as I could get.
Later on that afternoon, he emailed me back 2 images. One was the one you see above, the other was a tonemapped image of the same shot. Even though the tonemapped image was good, it wasn't nearly  as dramatic as this one. The HDR process allowed Jim to pull the midtone colors out of both the dock in the forground and the green trees on the other side of the cove neither of which could have been accomplished with the standard photo process. He was also able to gain more detail out of the shadows and edges fo the clouds.
I was extremely happy with the outcome of the Denham double team. We have combined a couple more times with shots after this one, but none have come close to equalling  this one.
The biggest plus of getting back into photography is being able to share the interest (obsession) with my twin brother. With him in Minnesota and me in Tennessee digital photography with the help of the internet, text messaging, and social networking help us keep in touch. I have learned a great deal from him and met some great people through his social networking circles. I know that photography wouldn't be as much fun without him.
Love you Jim.