This past weekend I believe I took my best portrait, or at least best senior portrait, ever. In the very least it is my favorite that I have taken. Not only is the picture just visually stunning in my opinion (helps to have a beautiful young lady like Tierra in the frame kick that stunning part up) but I had actually had a plan for the shot and the plan included a bit of experimentation in taking the picture that worked out perfectly.
Something I've always wanted to try was combining a long shutter speed from a landscape image such as a waterfall with a portrait to try and use flash to expose the model and also to freeze their action but not have to have them completely freeze to allow for the long shutter speed.
With doing Tierra Osorno's senior pictures on this past Sunday, I felt we had the perfect opportunity because we were going to be at Baby Falls in the Cherokee National Forest for part of the shoot. We got incredibly lucky because in addition to that the forest was at peak fall color as well.
My thought process for this shot wasn't really any different than what I normally do for any of my portraits. I would let the camera expose for the background and then let lighting expose my model, Tierra, in the foreground. To expose for the background I approached it the same way I would if Tierra wasn't there. I used Live View to frame up the shot with the camera on a tripod. After setting my focus on her, I turned off the autofocus and then moved my focus square in Live View over the white water of the waterfall. This allowed me to keep my focal point but expose for the water, or the brightest part of the scene. If I had exposed for the foreground, the water would have had blown out highlights.
I used a small aperture in order to get a really large depth of field in focus but also to get a longer shutter speed. I settled in at f/13 because this gave me plenty of the scene in focus and put my shutter speed right at 0.4 seconds, which is a good target for silky smooth water with just enough detail in it if there is a lot of water flow, which there was. My ISO was set at 125 mainly because it was completely overcast so it helped bump the light of the scene up just a touch. Below is what the frame looked like before adding any lighting: 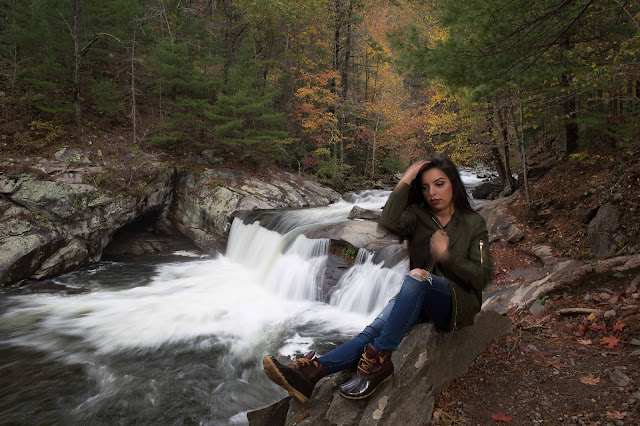 Then came the lighting setup. For standard portrait sessions I use a tri-flash setup of Godox TT600 speed lights. The lights are run from camera with a X1T-C Remote Trigger mounted on the hot shoe of my Canon 5D Mark III. I usually use a 47" Godox Octa Umbrella in tandem with the speed lights for portraits but with the day being a bit windy, I chose to leave the umbrella off so it didn't become a large sail and instead use a Neewer 31" x 47" Translucent Reflector which was held by Tierra's boyfriend, Troy, over the lights. This softened and spread out the lights so they wouldn't be so hard and sharp like they would be if they were uncovered.
I had been using the lights at 1/8 power and zoomed to 50mm the entire shoot until we reached here. With having to place them on a hill they were a pretty good distance from Tierra so I bumped the power up to 1/4 plus 2/3 after experimenting with them a bit.
The lighting layout looks something like this: 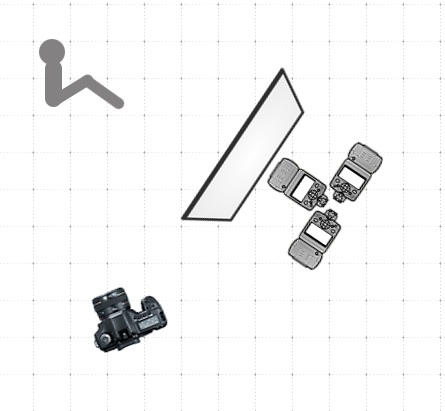 The shot worked exactly like I had hoped it would and post processing was pretty easy. In Photoshop I separated Tierra away from the background with the selection tool to make sure that I could edit her like a portrait and the background like a landscape photo. I also used the separation to even out the exposure by bumping the background up a bit and getting some more saturation out of the awesome fall foliage behind Tierra. I also did some dodging and burning on the rocks the water was falling over because I didn't have a polarizer filter for my 24mm lens to get rid of some of that glare on them.
So there you have it. The deconstruction of what is right now my favorite portrait that I've taken. Hope it was helpful and informative.
Posted by Denham Photography at 3:58 PM No comments: