Gotta credit Jim for this angle of the dock at the Springville Pump House. He posted a shot slightly angled to the right of this in his blog post: Line Dispenser.
This angle looking down the dock as it is centered in the frame really adds to the reflection. The house boat out in the cove ties everything together as it is almost the exact shade of blue as the sky. Jim also shows this well in his latest post Pump House Blues.
This is the last of my shots from our shoot at the pump house last Monday. Can't wait til Jim and I can get out and do some more. It sure is a lot of fun.
Posted by Denham Photography at 8:43 AM 1 comment:

When Jim Denham and I were photographing down at the Springville Pump House in Springville, TN the day after Christmas, I walked over to this dock and perused around at the bottom looking for an angle to shoot it. Nothing really jumped out at me.
Then Jim went up on the hill above it and started shooting. I followed him there and the reflection from that vantage point was fantastic. Jim started framing by centering the dock in the shot. I, however, more excited about leading the dock into the frame from the lower left corner. I think this works well with the direction the clouds were traveling.
I continued here with stacking my filters and shooting with long shutters. You can see how slow these clouds were moving by the fact that they are not blurred that much with a 25 second shutter speed.
Posted by Denham Photography at 8:38 AM 1 comment:

I hope that everyone had a safe & wonderful Christmas. Mine was a wonderful time with both my family and my wife's family in West Tennessee. It was very short lived, however, due to my wife's work schedule.
The day after Christmas my brother Jim and I took the small window of opportunity to go photog'ing.  We spent the morning at the Springville Pump House in Springville, TN. Even though I didn't get out of bed early enough to catch the early-early pre-dawn light, we still had a beautiful sunrise to catch some great reflections in the cove by the pump house.
With a pretty still wind and partially overcast skies, I used the opportunity to get some long exposures by stacking my polarizer, ND8, and ND2-ND400 filters. This fixed buoy in the shallow area in front of boat ramp was begging to be the subject of our work that morning. This particular shot I visualized with the cloud movement converging directly behind the buoy and the three rocks in the foreground leading the eye to the buoy as well.
My initial intent was to get some black and white images out of these long shutters but when I looked at this image in Elements, the blue sky and reflection on the water jumped out at me immediately especially with the long exposures flattening the water to enhance the reflection.
One of the best things about the holidays is being with family. These occasions when Jim and I can get out together and take some photos are becoming highlights to those wonderful family times. Can't wait til we get together again.
Posted by Denham Photography at 3:41 PM 3 comments: 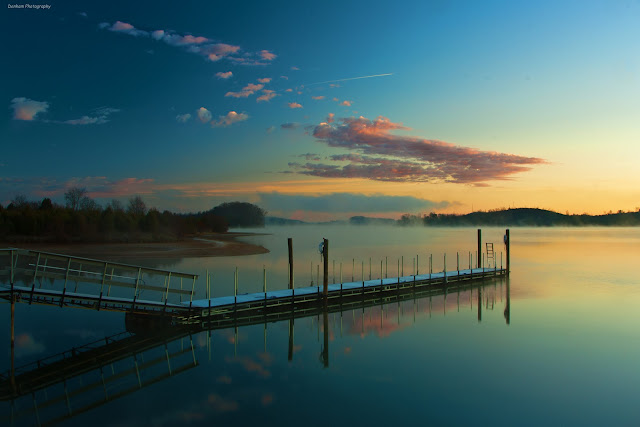 It's amazing what happens after you have given up on a sunrise and then all of the sudden nature thrusts something at you totally unexpected.
After 2 days of rain and gloominess, which provided for my image in my last post, the clouds broke and made for beautiful blue skies on Wednesday. Even though there was going to be a sunrise, I wasn't very excited about the prospects of a photogenic one due to the fact that there weren't any clouds in the sky.
All the sudden, after I had already entered work, there popped a few clouds to the north and the sunlight started striking them with a pink hue that just screamed for me to photograph them. The lifting fog on the lake made for some more interesting elements for the shot.
I walked out on one of our docks at work and set up looking at those clouds and used the floating dock for a foreground image.  The still lake made for a wonderful reflection of the dock and pink hued clouds.
I had already given up on the morning but luck came my way and I got a beautiful image.
Posted by Denham Photography at 10:08 PM 5 comments:

Was going through some old raw images that were stored on my work laptop and ran across some shots from Hunting Island, SC that I took last spring.  I processed an HDR of this lighthouse that I really liked but all of this was before I purchased Photoshop Elements.
With Elements and being able to utilize layering, burning, and brushing, which I didn't have the ability to do beforehand, I just had to give one of these shots another go.
Hunting Island was gorgeous and I want to go back there. The lighthouse, Live Oaks with Spanish Moss, Palm Trees, & white sandy beach were beautiful. I would love to venture all over the island and see more.
My favorite part of this image is the neat tree on the right and how it wraps itself up and points directly at the lighthouse which has the late evening sunlight striking the left side of it as well as the trees below and to the right of it.
Posted by Denham Photography at 9:40 AM 1 comment:

With daylight savings time in effect, getting off work at 5:00 pm makes it very difficult to take any pictures afterwards.
Thursday provided enough light & darkness for me to experiment with my new ND fader filter. This Neutral Density filter adjusts from ND2 - ND400. ND400 is equivalent to 9 stops so it makes for some great light blockage.
The evening skies on Thursday were very overcast with a new front moving in. The clouds however, were moving at a rapid pace across the sky. If I could block the light enough, I might get some 1 minute to 4 minute exposures and create some neat blurring effects.
I stacked my ND8 filter along with my polarizing filter to add some extra blockage and walked right out of my work to the lake front. During the winter the TVA lowers the lake levels on Tellico Lake. Don't know why, they just do. These lower levels allow you to see old tree stumps and other objects that normally would be covered with water on this man-made lake.
Right next to the shore is this old tree stump that I have photographed before. This time I climbed down next to it and was able to expose the old roots  on the dry ground. I framed the shot in the direction the clouds were traveling which also included the company's dock, which I have photographed several times. It did provide with some reflection in the shallow water though.
I thought I would use a very long shutter of 3-4 minutes but started with a 1 minute exposure. Turned out to be a good idea because I liked the 1 minute shot so much I didn't even tried a longer shot.
Posted by Denham Photography at 9:27 AM 4 comments:

A couple of weeks ago, as I arrived at work, the fog from a cool night was lifting. My first impression of the fog that morning was that it was extremely thick and absolutely covered everything. Not much for photography, so I just went into work as usual.
About a half hour later, I was walking down the front stairs in the offices and looked outside and noticed the fog was hanging just at the top of the treeline.  This caught my attention and I immediately grabbed the gear and took off to get a few pics. I didn't even switch lenses from my 85mm prime due to time constraints.
I actually shot 8 different shots for a panorama all across the lake.  When I stitched them together I thought it was too much.  I cropped the image to use only the mirrored trees on the right side of the image and their reflection with the fog lingering in the background.
With the thick fog laying at the top of the treeline, the sky and it's reflection in the water was completely washed out. I really dug this effect and how it worked in the image.
Posted by Denham Photography at 11:16 PM 5 comments:

It's been a while since I've posted to my blog. My time is being taken up by basketball games, cheerleading tryouts, family visits, and general everyday family matters. It seems like the only photos I've taken over the last 2-3 weeks has been basketball and cheerleading. Don't get me wrong, that is not a bad thing. I just haven't been able to sit down at the computer and create a blog post from a nature photo.
I did get out last Sunday with my good friend Tim Owens and take a hike to Falls Branch Falls off of the Cherohala Skyway in the Cherokee National Forest.  The hike down to the falls was very deceptive. It was a gradual downhill trek for about 1.3 of the 1.7 total miles. The last .4 miles or so was a very steep decline to a beautiful cliff waterfall that was just as impressive as any I've seen.
I was very disappointed in myself, however. I didn't take nearly as many shots as I normally do and didn't climb down the cascades that were downstream from the falls. Don't have any reason why, just seemed like I was in a rut.
The rut truly multiplied when we started our ascent back up the trail.  That .4 miles that were very steep down hill on the way to the falls were very much up hill leaving the falls. It was like walking up a half mile flight of stairs. I could hardly catch my breath. With the rest of the hike back to the parking area a gradual incline, I just had a terrible time making it. The last 1/4 mile or so my legs decided they didn't want to work anymore either. We did finally make it back, though.
I will definitely try to make this trek again sometime. There were moss-covered logs, ferns, and just loads of greenery littering the trail all the way and I would love another chance to shoot the waterfall and stream and capture them better.
Did capture a couple of nice images though. The one in this post is downstream of the main falls, which you can see in the background. I was standing in the stream with my tripod straddling the waterway. Rhododendrons were everywhere and trying to get in the way of my image. Fortunately, they bracketed the frame in the foreground and background with the stream winding around them. Tried to get as low as I could to make a foreground element out of the shelf right in front of me. All in all, I really liked the way this one turned out.
Posted by Denham Photography at 11:56 PM 4 comments: