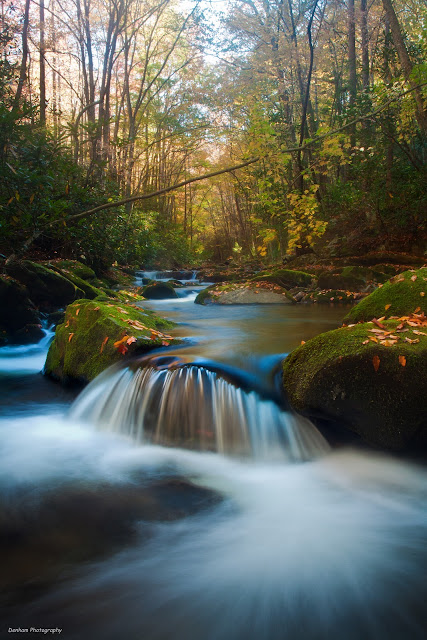 As I have stated in previous posts, the fall color in the Smokies was unbelievable a couple of weeks ago. Here are a few of my favorite shots from a day well spent in the park. 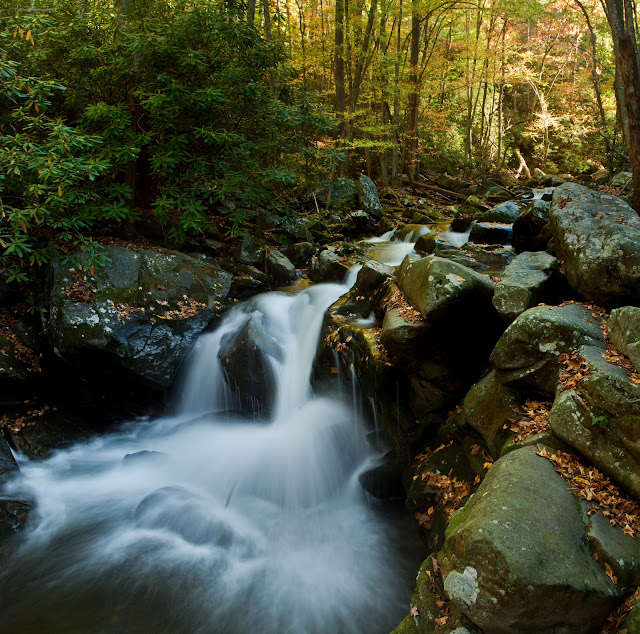 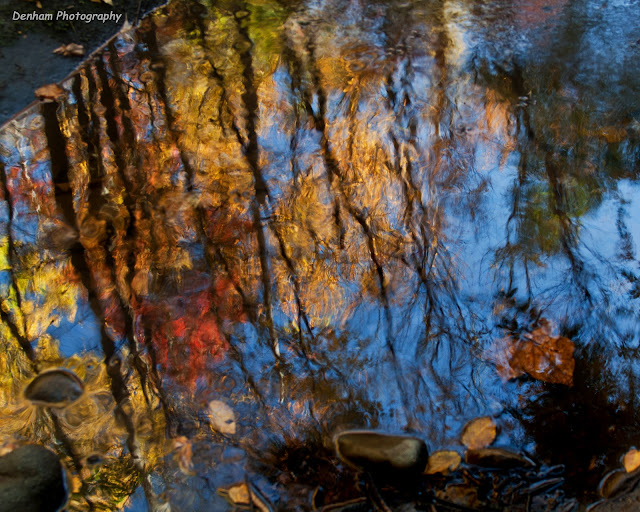 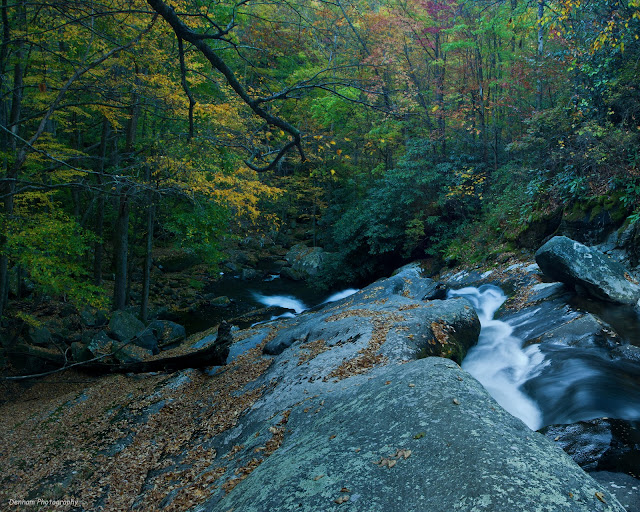 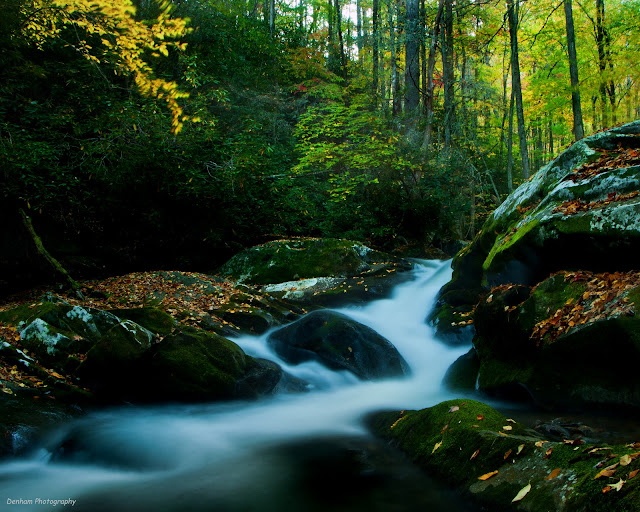 One of the biggest lessons I have learned from great Nature Photographers like Ian Plant & Richard Bernabe is that when shooting fall color reflections, look for the reflection to take place when the sun is striking the trees and foliage on the opposite side of the river or lake but not on the water. This enhances the reflection of the foliage and also allows the blue sky to reflect on the rocks because the sun hasn't shined on them yet.
While photographing along the Lynn Camp Prong Sunday morning in Tremont area of the Great Smoky Mountains, my friend Tim Owens and myself were determined to catch some of these type of reflections. The color was definitely there, we were just waiting for the sun to climb high enough to strike the trees just right to cast the reflections. We had been at it for about 3 hours and even though the sun was intruding in places where we wanted to get longer exposures of waterfalls, but we hadn't found that calm pool of water where the light struck it right.
At about 11:00am we came across the spot you see in today's post.  The tree tops on the opposite side of the river were being illuminated by the sun and the reflections were reaching out to us through this small pool right by the banks. The reflections were being cast onto the water pouring over the single cascade shelf just up stream as well.
Beings that the sun was hitting the tops of the trees there was still enough shade to allow for a long shutter speed on the cascade and some smooth water effects. The yellow and orange leaves scattered around the green, moss-covered rocks tie in with the yellow tree reflections in the water all the way back through the shot.
Posted by Denham Photography at 8:34 PM 7 comments:

As I stated in previous posts, the colors in the Tremont area of the Great Smoky Mountains National Park this past weekend were stellar.
Yellow and green were definitely the primary colors though. Green being existing color of the Rhododendrons and moss on the rocks with the yellow of the autumn leaves both on the ground and in the trees. There were splashes of orange, pink, and red but the green and yellow were dominant.
The image in this post is actually just upstream from the waterfall photographed in my last post MY GIRL. I loved all of the moss-covered rocks scattered throughout the stream. Wasn't aware of it until I got the photo merged together, but the rocks and Rhododendrons form an X in the center of the frame with the yellow trees and the water in the stream holding the shape at the top and bottom and all of them converging where the stream disappears in the background.  The yellow leaves dotting the green rocks kinda tie the whole thing together.
I even got a small Eddy swirl at the bottom left of the image with only a 3 second exposure. Bonus!
Posted by Denham Photography at 7:09 PM 4 comments:

To a 10 year old, 5:00am is tremendously early on a Sunday morning. On Saturday, when I was talking to Tim Owens about meeting up and going into the Smoky Mountains, however, my daughter Jocelyn asked if she could go with us knowing it would be an early start. When I told her we would be up at 5:00am, she knew it and was still willing to come along.
Now, there have been times when I started to get her up early and she refused to go along, Sunday was not that way. I woke her up and told her to dress warm and she was up and ready in no time. After stopping to grab breakfast and meeting Tim, we were off to the mountains.
We came up to Middle Prong Trail just after daylight was breaking and headed up the trail. It was an easy trail. Very wide and no rocks or tree roots to climb over.
When we came to our first cascade and had to climb down the bank to the river, Jocy didn't hesitate and climbed down with us. She didn't have an issue with sliding down on her backside in spots that were steep and was very patient with our photography. I asked her to jump up on a rock to pose for me and she wasted no time getting in position and stood very still for a 2 second exposure.
Where ever we stopped I tried to get a shot of her to both include her and record it for her to see when she grows up and I show it to her and she can remember the day. I even got in a shot with her that was borderline over exposed  but I still love it because it was us.
Jocy never complained the entire 4 hours we were on the trail until I mentioned being hungry. She then said she was hungry as well and wanted to go back to the car. Fortunately, even though we had no idea what time it was, it was around 11:00am and the midday sun was washing out everything with harsh light so we headed back to the car.
I really enjoy the fact that Jocy is willing to come with me on these photo excursions. It means a lot to me. Someday, when she gets older, she will lose that interest and hanging out with Dad won't be "cool" anymore so I need to take advantage of it while I can.
I love you Jocy. Thanks for making your old man feel important.

Enjoyed some incredible fall color in the Great Smoky Mountains National Park on Sunday morning. My good friend Tim Owens, Jocy, and I got out early and drove to Tremont and hiked the Middle Prong Trail. What a great, great trail. As far as I am concerned, this was an ideal place to experience the Smoky's fall color.
I have to thank my friend John Deas for cluing us into this trail. He told me about it last week and after talking to Tim about it, we had to go and man were we glad. Cascade after cascade and green, moss covered rocks, and pink, orange, and yellow trees everywhere. Leaves littered the rocks and river beds. When the sun started hitting the tops of the trees the reflections were incredible.
Today's post was taken just in front of Lower Lynn Camp Falls.  This shelf took a little bit of a chore to access through rocks and rhododendrons but once I got there it was well worth it. This shelf filters down through this small cascade and the pool above reflects the green rocks and colorful trees above fabulously.  I framed the shot so that the horizontal lines of the shelf along with the stream flowing to left worked through the shot back to the colorful trees in the background.
One of many to come from this wonderful jaunt into the park. Keep your eyes open for further posts.
Posted by Denham Photography at 8:10 PM 6 comments:

Today's post is one that I have been swearing that I was going to do and have never had the opportunity until Friday morning.
If you look at the image without knowing what went into making it, you probably won't be that excited about it. An old barn in a yellow field of Soy Bean leaves.  Well if you look at the lens flare at the top right of the image, that isn't the sun creating it. It's the moon. And the small streak just below that lens flare is a star trail formed from holding the shutter open for 4 minutes.
I took this photo at about 6:45am and the sun's light was just starting to crest the horizon directly behind me.  The moon was just shy of being full but was incredibly bright so I wanted the moon's light to light up my image. 4 minutes allowed the moonlight to make it look like daylight in the shot.
The lens flare that passes over the barn on the left hand side of the image is from passing cars that came by during the exposure. Wish I could've done without it, but it doesn't deter too much from the shot.
Very little post processing here. Just some dust removal and filtered some noise out of it.
Posted by Denham Photography at 11:34 AM 1 comment:

After about a 1 1/2 week I am finally able to post to my blog again. Sure has been raining a lot the last  3 days. I did brave the rain at lunch time on Wednesday to try to capture some fall color. I found this field with these 3 barns  in it surrounded by yellow and red trees. Wish I could have gotten inside the fence and looked closer to these gems but I was very content to shoot from the road.
Took 4 images and stitched them together in Photoshop Elements Photomerge Panorama. Hopefully be chiming in a little more in the next few days.
Posted by Denham Photography at 12:00 AM 1 comment: