You ever have one of those landmarks that you pass on the road every day and say to yourself, "I have got to photograph that!"  This old rusty truck is one of those landmarks. It sits next to a corn field that is used as a maze and haunted trail in the fall but just sits alone amongst cut down corn stalks the rest of the year. It is located just on the other side of Tellico Lake from Vonore, TN on the way to Greenback.
A couple of weeks ago, I was coming back from a doctor's appointment in Maryville and just could not resist stopping and taking a few shots in the bright afternoon sun.
I took several different angles but really loved the front view filling the frame with the truck with the beautiful white cloud filled sky as a background. Because of the harsher light I chose to bracket all my shots in hope of processing an HDR image.
Tonight I used Luminance HDR, a free downloaded HDR software, to process this using it's Fatal process. I really loved the color this process provides even though it still leaves the image with a small painterly look. I especially like the sky reflection in the windshield of this rustilicious old beast.
I processed a black and white of this as well using a gradient filter in Photoshop Elements. I really like them both. Please let me know if you like, dislike, or are indifferent as to the processing of both of these. 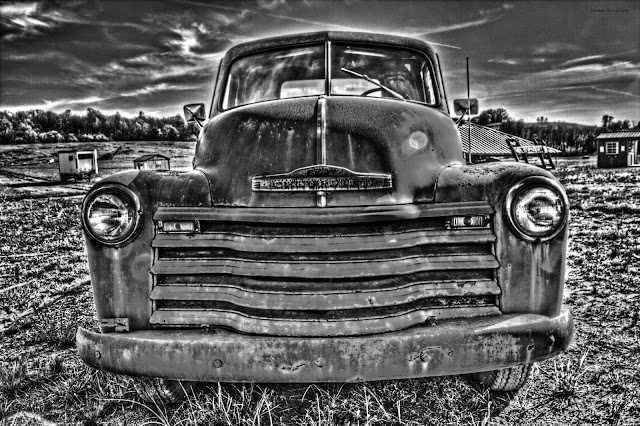 Friday is always the most looked forward to day of the week. After grueling through a workweek, it is always like making it to the finish line of a race to make it to Friday.  I was looking forward to Friday even more than usual. Even though I had only a 4 day work week, the reason it was short was due to my mother-in-law passing away the week before. Going back to work after that was not necessarily the happiest of days.
There was another reason Friday was special. Spring has arrived early this year and as I arrived at work, the sunrise was as spectacular as any I have ever seen. I know that I take several early morning images at my workplace and that I include both of the docks that are located there as well, but there was no way I wasn't going to photograph the wonderful cloud formations that were occurring that morning.
Unlike most photos that I take at work of the docks, I found since the water level was still down that the rocks laying around between the docks and the groove in the sand right next to them formed by rain runoff made for a great foreground element.
I mounted the polarizing & ND8 filters on my wide angle to get a longer than normal shutter speed to smooth the lake water out and give a more desirable, at least to me, reflection of the clouds and predawn sunlight which was glowing just behind one of the most interesting, mushroom-shaped trees that I have the privilege of seeing every day as well.
Manually blended two separate images, one for the foreground & one for the background, in Photoshop Elements for this shot. Did some minor adjustments and sharpening afterwards.
Posted by Denham Photography at 4:48 PM 3 comments:

The first morning I was in San Diego, CA, I took a short jaunt down by the USS Midway which is docked and now a museum down at the Port of San Diego.
This aircraft carrier was the very first carrier commissioned after World War II and was considered to be the tops of her class. She was active during the Viet Nam War and in Desert Storm. Wikipedia has a pretty descriptive write up on her HERE.
On Monday night, the conference I was attending had an off-site event on the Midway. We were able to go up on the flight deck and look at some of the planes & helicopters that donned her decks in the past. It was way cool.
For my photo that I have posted today, the morning was overcast and the clouds were moving quite fast. This made me think of a black and white image with a long shutter to capture the quick-moving clouds. I was really drawn to this massive cleats that the ship was tied down to so I placed one large in the foreground. Would have loved to catch the rope from this cleat leading to the ship but they were all perpendicular to the carrier and did not work out for me.
Posted by Denham Photography at 8:44 AM 3 comments:

Piggy-backing on Erik Kerstenbeck's recent post on his blog: What Lies Beneath, I processed a couple of images from underneath Crystal Pier that features the magnificent Kelp that was gathered around.
I processed these in a trial version of HDR Express from Unified Color and was terribly excited about the results.  These were both done as single image HDR's with the grunge styling available in HDR Express. With this software, after you merge the 3 images (or single image in this case) you select a tone mapping and then a style. Both of which can be modified and saved as your own style or tone mapping settings. I like this software very much and will look at purchasing in the future.
One thing that I was determined to achieve underneath the pier was creating reflections on the wet sand and water of the pier pilings.  In the above image I put the kelp right up front and got low down next to it to get an exaggerated foreground element.
In both of these images the sunlight shining through at the end of the pier really added another element to them. The smaller aperture created a small sunburst that poked through as well.
Posted by Denham Photography at 3:25 PM 1 comment:

Crystal Pier was a goldmine of images. Starting with the rain forcing Erik Kerstenbeck and myself under the pier to find kelp, long exposures, some guys eager to get their picture taken, and a couple of soakers when the waves got to high.
As the rain moved out and gave way to an incredible sunset, we ventured out from under the pier to photograph some outstanding cloud/sun formations. After a storm is usually the best time to get dramatic clouds and light, especially in the evening and morning hours. The low sun casts golden light against the underside of the clouds and this against a deep blue sky is phenomenal.  Throw the Pacific Ocean surf and Crystal Pier in the mix and you just can't ask for anything better.
As the sun got lower to the horizon, the interference with the clouds exaggerated the light coming off the sun and made for some awesome natural sunbursts. The image in today's post is an HDR tonemapped shot, courtesy of brother Jim, where the sunburst occurred right at the end of Crystal Pier. I positioned myself so that would happen without knowing that I was going to get a reflection of that sunburst in the wet sand of the surf.
After the sun dipped below the horizon, the orange and pink colors shined bright against the quickly moving clouds. It was a tremendous sunset and opportunity for photography.
Posted by Denham Photography at 8:27 AM No comments:

Thursday it was 70° and sunny here in East Tennessee. Trees and flowers were starting to bloom, and spring fever was running rampant.
Friday a massive series of thunderstorms came through the area and with it, came a cold front.
This afternoon, Tim Owens and myself had plans to go into Tremont in The Great Smoky Mountains National Park and do some photography. The day started out a comfortable 57° and sunny. Looked like a great day for shooting.  By the time we got to Townsend and started to entire Tremont it was overcast and the wind was blowing cold.
When we got down near the end of Tremont Rd the temperature was in the low 40's and there were snowflakes falling on us as we got out of the car and started taking photos.
Even though it went from spring back to winter, I still didn't feel as cold as the temperatures suggested I should be.
After we took some shots at our initial location, we drove back towards the Townsend end of Tremont and found a small waterfall that only comes out in the spring when the rains have flooded everything on top of the mountains and water flows all over. The very top of the visible part of this waterfall was fantastic and fell about 10 feet or so straight down and then cascaded and turned around beautiful moss-covered rocks all the way under the road and joined the rest of the main river.
When I started up the waterfall, I really noticed this large rock in the center of the stream that the stream divided itself around. I had to have it in the foreground. I arranged a 3 shot pano with portrait orientation with the stream just to the left of the rock leads in from the left of the frame and the rest of the water winds back to the main drop of the waterfall in the background.
It was overcast so getting a 1/2 second shutter speed in the middle of the day without using an ND filter was really cool.
Posted by Denham Photography at 9:46 PM 2 comments:

WOW! On March 1st, it was sunny and 70° here in East Tennessee today. The lack of any winter what so ever has made the Bradford Pear trees bloom in the last 3 days. I'm afraid that we will get a late winter and it will kill what has started to bloom.
When I left work, I had to mount the 85mm prime and catch some of the beautiful blooms on the Pear trees before any kind of winter comes and kills them or they fall off. The hang around for only a couple of weeks before they fall off especially when spring rains come and knock them off.
The Cherry Blossoms are budded and ready to bloom as well. Hopefully, if we don't get some freezing weather, I will catch some shots of it one day work as well.
Posted by Denham Photography at 8:57 PM 3 comments: