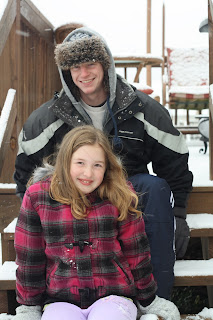 Yesterday, my wife and I were shopping in Aeropostle and I noticed the add pictures they had behind the checkout counter of the young people dressed in their garb posing in the snow. I remarked to my wife, Melissa, how much I liked them.
Well, this morning the snow started falling in East Tennessee. I was at the computer, as I usually am when my wife works, and she texts me and says "u could have them put their tobagans and toukes on and get close ups of them with snow like the pics at aero."
What a great idea!
My daughter, Jocelyn, beat me outside. My son, Shea, woke up and immediately got dressed for the weather and we all went out and had some fun.
With the snow coming down I did not want to damage my camera by letting it get wet so the first thing I did was put a polarizer filter on my lens. Then I covered the body of the camera with a Wal-Mart shopping bag that I made a hole in to poke the lens out of. Took one of Jocy's ponytail rubberbands to fasten around the lens, and we were off.
This offered me another opportunity. Shea is 19 years old and this afternoon he will be leaving us to enter the United States Marine Corp. He will be in basic training at Paris Island, SC for 13 weeks where the only communication we will have with him is through written letters. This photo that I have posted here is the last shot I will get of Shea before he leaves.
I don't know if I got the quality of shots that they have on display at Aeropostle (you can check out my album on Facebook here) but I did get a parting shot of Shea laughing, playing, and having a great time.
Shea, we love you and know you will do well. Semper Fi!