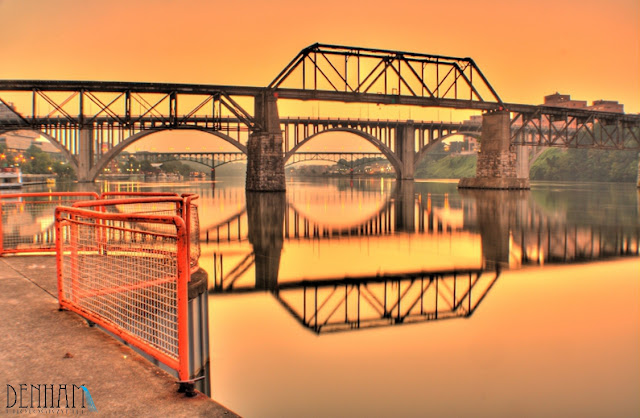 The Tennessee River separates the state of Tennessee into 3 sections, East, Middle, and West. Not sure which direction the river runs but it makes a U shape from Knoxville south through Chattanooga down through Alabama and then back up north sectioning Middle and West Tennessee and ending at Land Between The Lakes at the Tennessee-Kentucky border.
One fall morning I made an early trek to downtown Knoxville to try and get a reflected shot of the lights of downtown on the Tennessee River. I tried to find a vantage point on the south-eastern side of the river but just didn't know my way around and was unsuccessful. I didn't give up on getting some kind of shot, though, so I drove across the river into downtown and followed Neyland Dr. down to the river front.
I found a landing on the river called Volunteer Landing.  This is a very popular place during University of Tennessee football games. The football stadium is right on the river, the "Vol Navy" docks here and parties until game time when they leave their boats at the landing and cross the street into the stadium.
There are 4 bridges that span the river downtown. The one I traversed was Highway 129 or Alcoa Highway as it is known around here. It is roughly a half a mile to a mile back west of Volunteer Landing. There are 3 bridges that cross almost right next to each other just east of the landing. The first is an old train bridge, followed by the Henley St. Bridge, then the Gay St. Bridge. This arrangement of bridges caught my attention and I had to catch them in a shot.
I got down as close to the water as I could on a cement walkway that leads front he dock up to the road and a restaurant on the river.  The orange railing and golden sunrise provided contrast against the dark colors of the bridges.
I got my reflection on the Tennessee River. Instead of the lights of downtown, though, it was the string of bridges that spanned the river itself.