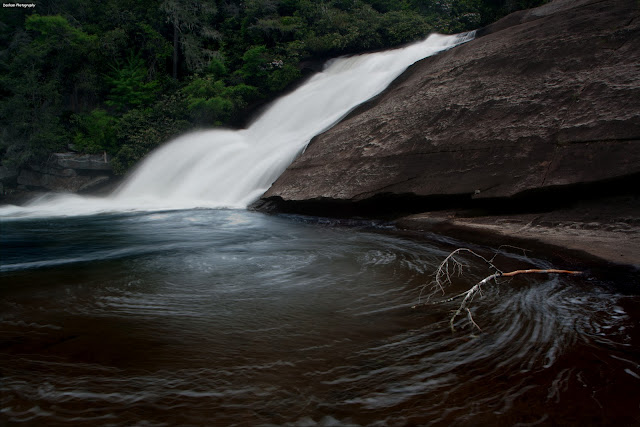 Yesterday, May 12th, I attended Richard Bernabe's NC Waterfalls Workshop. Richard Bernabe is an award winning professional nature photographer. He is one of my very favorite and between his and Ian Plant's blogs and ebooks I have learned most of what I know about nature photography. Richard's web site is HERE and I highly recommend paying it a visit.
The workshop started out from Hendersonville, NC and during the 10 hours we were out we visited and photographed 5 separate waterfalls. When we would arrive at each spot, Richard would give everyone tips as to the best composition and exposure for the scene. He also taught us about our camera's Histogram and how to properly use it. What a difference it makes knowing how to get proper exposure.
The second stop on our waterfall tour was in the Dupont State Forest at Triple Falls. This is an incredible 3 layered waterfall banking down over huge, granite rocks. We were allowed to photograph on the middle and top layers of the falls but could not go down to the bottom due to the dangerous climb down the rocks. Even the top two tiers were slippery and one of the workshop attendees fell just walking on the wet rocks.
This photo is of the second tier falls. It was the only waterfall that we visited that I didn't get the composition that Richard suggested. This wasn't on purpose. I was just attracted to this large Eddy next to the fall.
Richard did give me some advice on this one though. When I told him that in order to achieve the eddy I had to use a shutter speed that over exposed the waterfall, he suggested exposing one shot for the eddy and another for the waterfall and blending the two together. Normally, I would have tried to work on the photo with the eddy and try and edit the exposure of the rest of the image. This worked out perfectly. I actually blended 3 images, 1 for the waterfall, 1 for the eddy, and 1 more for the foliage in the background.
Had a great time yesterday and learned a ton. Definitely more to come from North Carolina's Waterfalls.
Posted by Denham Photography at 8:11 AM