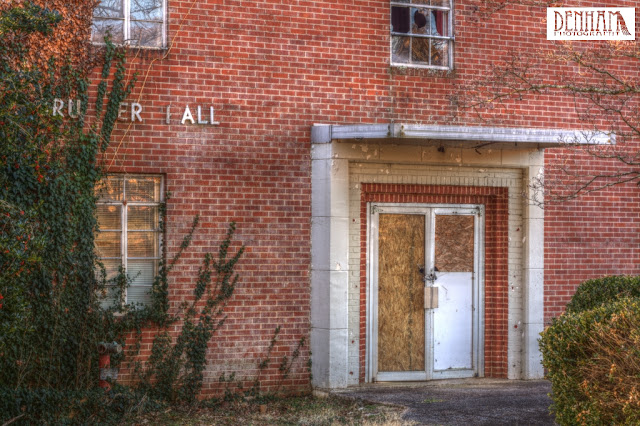 Canon EOS DIGITAL REBEL XS, Canon EF 50mm f/1.8 II, ISO 100, 3 exposure HDR at f/8.0
About a mile down the road from my house is Hiwassee College. This small community college is one of the oldest colleges in the state, if not THE oldest.﻿
Over the past few years the school has been struggling to keep it's accreditation's.  The last couple of years, though, has seen them gain back their accreditation's as well as offer 4 year programs and degrees. Maybe this will aid in bringing money to the school so it can be spent on the infrastructure.
Hiwassee was established in 1849 and when you walk around the campus, you would swear that with the exception of the chapel, the buildings that are there have been standing it's entire existence. Most older college campuses have a true old, nostalgic feel to their campuses but Hiwassee takes it to the extreme.
Monday morning after I shot the windmill from my previous post WINDMILL MORNING my travels landed me at Hiwasse to explore the college.
The first parking lot that you come to is across from the the Rudy Youell Recreation Center and adjacent to Brunner Hall. Brunner Hall was erected in 19156 and at one time was a dorm. One of the oldest buildings on campus it was probably the first dorm built at Hiwassee.  It was renovated back in 1957 and again in 1978 and could house 84 students. I wasn't able to get inside the building because it is boarded up and chain locked from being condemned only 33 years after it's last renovation.
I really thought it was neat how the ivy crawled up the side of the front wall and has totally mangled the building's name plate.
Hopefully, the future will see me pull some strings and try to get inside the building for some urbex photography.  Until then I will just have to be satisfied with the dilapidated outside of the building and wonder what time has done to the inside.
Posted by Denham Photography at 8:40 PM