BEST SEAT IN,..ER OUT OF THE HOUSE? 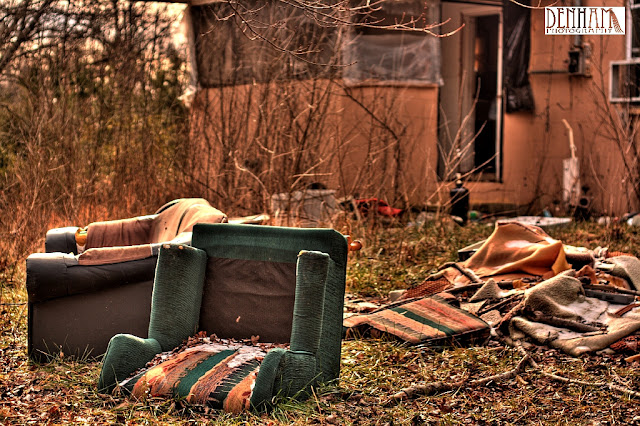 Canon EOS DIGITAL REBEL XS, Canon 50mm f/1.8II, ISO 100, 3 Exposure HDR at f/2.8﻿
I have been very unhappy with the fact that the National Weather Service has been saying we are going to get 4-5" of snow this weekend and we haven't seen anything but some flurries.  Really been itching to take some snowy landscape pics, just haven't been anywhere near snow to get them.
I've also been frustrated with the fact that I just haven't been able to get a photo that I have been happy with in a week or so. That's why my previous post, CASEY IN THE CLOUDS, was a shot from last May.
On my way home from taking my son to basketball practice today, I drove by an abandoned house that I have noticed before, but haven't really been attracted to it to photograph.  Today was different in that I noticed an old recliner and couch sitting next to each other in the yard. In an earlier post just after Christmas, HAVE A SEAT, I posted a similar scene only it was in the living room of an abandoned house.  This furniture was out in the yard!
You can see that there is other garbage out in the yard like a vacuum and a lamp.  They were closer to the house entry than the furniture.  It almost looks like whoever did this was dragging the furniture out and just left a wake of other garbage behind it as they went along.
Whatever the reason, I think it created an interesting scene.
Posted by Denham Photography at 5:00 PM