CASEY IN THE CLOUDS 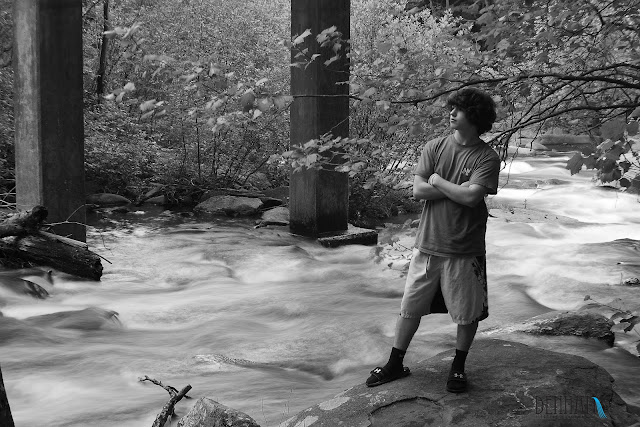 Canon EOS DIGITAL REBEL XS, Tamron 28-80 lens @ 54mm, ISO 200, f/14, 1 sec.﻿
I was having trouble finding anything that I have taken lately as post worthy so I did what several of my photog friends have been doing, looked back in my archive.  Low and behold, I found what I probably thought as one of my favorite images.
This image was taken back in May shortly after the purchase of my new DSLR. The family made a jaunt to Bald River Falls and played around in the water on a steamy Friday evening.
When the light was getting scarce, my wife wanted me to take some pictures in black and white with the kids standing on this rock out in the stream underneath the falls and the bridge.  I have stated before, my wife is a huge deal to my photography and she hit the nail on the head with these.    With there being so little light underneath the bridge I had to have the kids stay perfectly still for these shots in order to have a long shutter speed to get enough light.  They were real troopers and did a great job.  The long shutter really had a great effect on the water as well giving it a cloud-like shape.
The black and white pulled neat details out of the water even though it was blurred by the long shutter.
This is my son Casey in the photo and his pose is very similar to his normal attitude, which is what I love about this shot compared to the other kids' poses.  He kind of exudes an "I don't really care" pose which is so Casey.
Posted by Denham Photography at 4:12 PM