Something I have never done is explain my post-processing of my action shots from basketball, cheerleading, football, etc. I have actually learned quite a bit in the past year about composing, capturing, and processing sports/action shots and thought I would share what I have learned and how I have applied it.
First and foremost, if you are interested in getting better action shots, I highly recommend following Scott Kelby. He is one of the most highly acclaimed sports photographers around and a Photoshop guru.
Back in June I watched Scott's Tips For Shooting Sports video clip at the Google Plus 1 year anniversary conference. This absolutely changed my approach for my sports photography.  I will not dissect the entire video, but there were a couple of things that clicked the light bulb above head to the ON position.
(1) To get Sports Illustrated / ESPN The Magazine type shots, you must be shooting at at least 1/1250 second or faster. This struck me as gold. Even though you can still get decent shots at slower speeds, they won't be as crisp and sharp as when you shoot at these speeds or faster.
(2) Scott says that those magazines only take 2 types of pictures and print them. Action shots, but only if they have the ball in them (or puck if you are shooting hockey). Without the ball you really don't know what's going on. Holy Cow, I'd never thought of this before but it is so true. The other type of shots are of emotion. The thrill of victory or the agony of defeat.
I have applied these two tips to everything I have shot in sports this year. I won't even post a sports shot if it doesn't have the ball in the shot and making sure I am shooting at 1/1250 or faster has made my shots so much sharper.
Alright so when I shoot in a gym, I shoot with my Canon EOS Rebel T3i & my Canon 85mm 1.8 USM lens. I my initial settings automatically start at shooting in Aperture Priority set at f/2.0. I set my ISO at 6400. My camera has a special function that can bump this to 12,800 but I prefer it at 6400. If you are shooting with a Canon 5D Mark III, 1DX, or the Nikon equivalents this number goes up and you can shoot at smaller apertures and reduce the noise. I also set the White Balance to Auto and shoot in RAW so I can adjust it in post.
Sometimes, as with the shot I have posted at the top of this post, I have to adjust the EV (Exposure Compensation) down so that I can get the shutter speeds I want. This can cause the shot to be slightly under exposed. Unless it is just really dark, Adobe Lightroom can pull the exposure out in post-processing though.
I only use the center focus dot of the 9 that my camera has and set the Autofocus on AI Servo. This is for tracking moving objects and is very much a necessity. I also use the custom functions to set the focus button to the Star button on the top and back of the camera. This allows the tracking to work and the shutter button to be free to push as you focus. Makes for following and shooting the action much better.
OK, now I will go into the post-processing of the image that I have posted above. 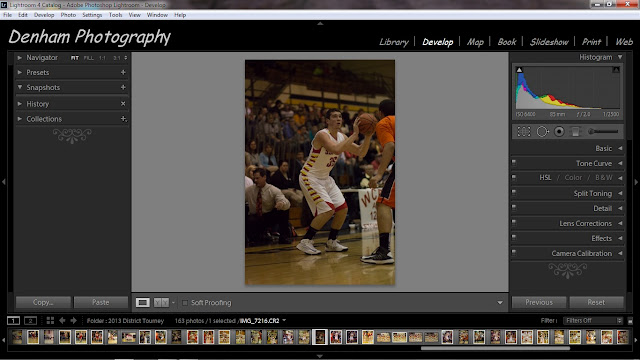 What you see here is the opening Develop screen in Lightroom. You can look up at the histogram in the top right corner and see that it is pushed to the left which indicates that it is under exposed. You can also see all of the menus underneath the histogram. This shot was a pretty simple edit so we won't go into too many of these. 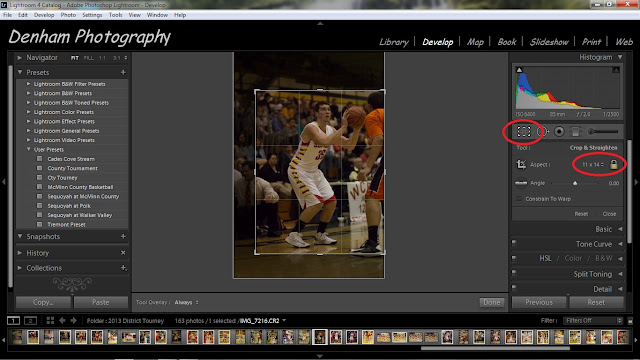 The first thing I do is crop the image. The red circles in the pic above show both the crop command and the toggle that adjusts what crop factor you want to use. I have been cropping everything at an 11" x 14" ratio but that is just a personal preference.  When I shoot, I tend to take everything at a portrait orientation because people are taller than they are wide and I can fit more of the subject in the frame. This usually forces me to crop the image later. Notice the ball is in the shot and I kept a portion of the defender in the shot as well. This shows that he is about to make his move with the ball. 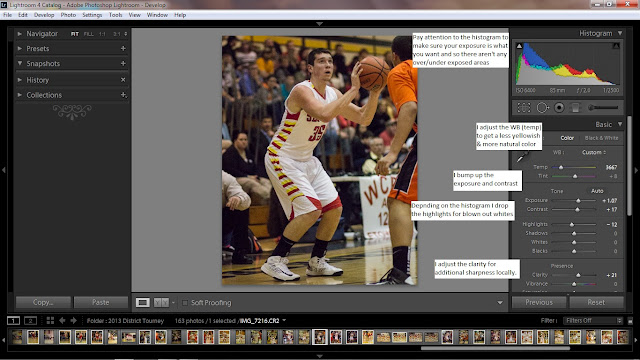 After cropping, I select the BASIC editing bar and do just that, basic editing. The first thing is to adjust the White Balance. Most gym lights cast a yellow or orange hue so I have to lower the temp (WB) to try and get a normal lighting cast.
I then bump up the exposure and you can see the histogram slide to the right. Make sure not to over expose and blow out the whites of the uniform. Sometimes I will catch the gym lights in the shot and the histogram won't completely come off of the right edge but just make sure the subject is not blown out. If there is a bit more, adjust the Highlights and White levels to knock down the exposure as well.
Slight adjustments to Contrast and Clarity for sharpening and crispness are all that I had to adjust for this shot and that is all that I used the BASIC BAR for. 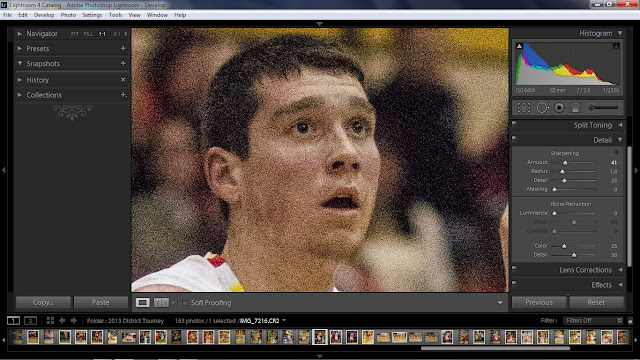 If you zoom up on the face (which is where I always zoom to at this point) you can see the digital noise in the shot that is the product of shooting at high ISO settings. Under the DETAIL Bar you can do additional Sharpening (just slightly) but most importantly you can adjust the Luminance Noise settings. With the Noise settings I will not run the slider above halfway. If you do you run the risk of blurring the sharp edges of your shot and getting an almost fake look to the player. It is a fine balance between the noise and sharpness of your shot so it is a personal preference but pay strict attention to it. 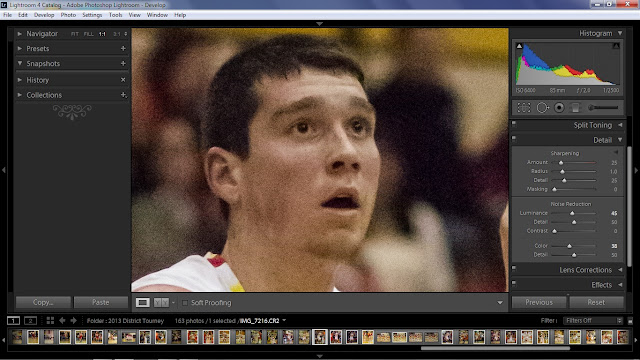 The above pic shows the shot after noise adjustment. 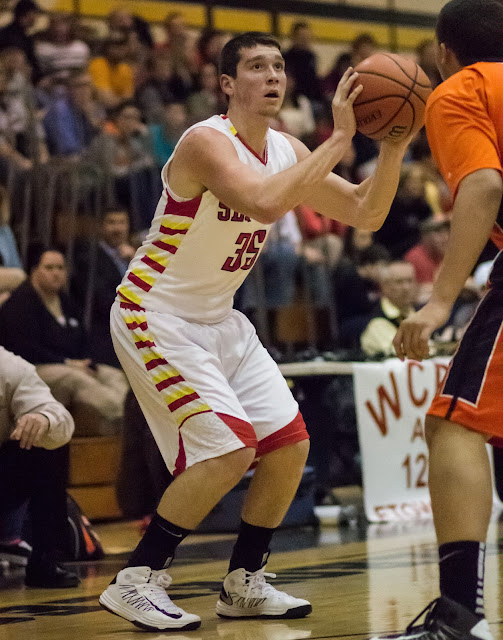 That was pretty much it for this image. Depending on the shot there can be adjustments to color vibrance and saturation if you want it is all a personal preference.
There are a lot of photographers who are much more experienced post-processors than I am that can probably give you more and better tips. I am definitely no pro at this and will continue to try and improve my whole sports photography work flow from camera to print. My advice to anyone is to shoot, shoot, shoot and then experiment with post-processing as much as possible. The UNDO button is a wonderful thing.
Hope this helps someone with some ideas and problems.
Posted by Denham Photography at 11:29 AM