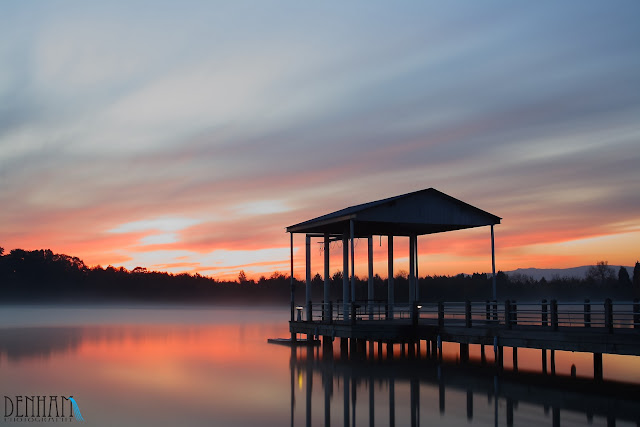 Those of you who know me know that I have learned a lot of what I do from a photographer named Ian Plant. He calls his web site Dreamscapes because of the way he makes ordinary landscapes look anything but ordinary. Take a look at his work here.  I have all of his ebooks and they are worth way more than the $5 or $8 that I paid for them. My favorites by Ian are when he uses long exposures to capture fast-moving clouds that create awesome effects.
This particular entry follows along those lines. The setting is at my place of business, Tennessee Watercraft, Inc. in Vonore, TN. TWI rests on Tellico Lake. If you look to the east Vonore is just on the other side of the lake and even further is The Cherokee National Forest and then the Great Smoky Mountains National Park. With all of this wonderful landscape to the east you can imagine how amazing sunrises can be.
Three days before I captured this image, I was in the same spot about an hour earlier in the morning. I took some interesting images, but none that I thought was good enough to post. I got some 30 second exposures that I thought were neat because the font of the dock was slightly illuminated by a flood light on the side of the building some 200 yards or so behind me.
With the neat thought of exposing the shot longer to try to add to the shot, I returned three days later. I had not arrived as early as I had the previous time. This ended up being a good thing. With a little more light, clouds were more visible and unlike the previous day, there was lingering fog on the lake.
I tried to use the leading lines of the dock and it's reflection entering in from the right to lead you from the front of the image to the back where the sunrise occurs.
By adding a D9 neutral density filter onto my Tamron lens, I was able to block some light and leave the shutter open for 2 minutes. The long exposure gave the fast-moving fog a glazed look on top of the water and the clouds a motion blurr as they streaked towards the oncoming sunrise.
With nary a ripple on the water the reflection of the dock and sunrise are a mirror finish with only the fog separating them.
This was also one of the very first images that I took after reading Ian Plant's tips on using live view in my Canon DSLR to achieve better focus and exposure in my nature and landscapes. I use it constatly now and it makes an enormous difference.
This shot may not qualify as one of Ian Plant's Dreamscapes. It is probably my favorite shot, and a stepping stone on the way to getting there though.