I have the pleasure of hosting this the sixth run of our Grunge Collaboration.  There are normally six participant photogs that take part in this project, Jim Denham, Rob Hanson, Chris Nitz, Jesse Pafundi, James Brandon, and myself. Round V was hosted by Jim Denham and you can see those results HERE. Unfortunately, Jesse and James could not participate this go around.
If you aren't familiar with these types of HDR collaborations, one of us supplies a set of bracketed shots for all of the participants to take and process as they see fit. When all are finished the supplier of the brackets posts the results on his blog for everyone to see and compare.
This time around it was my turn to supply the shots.  These particular set of brackets I shot at lunchtime at work. They are of a robot conveyor motor and that has been in place for 10 years or so and are showing the signs of wear and tear.  Let's get to the fun, shall we.

The main body of this image seemed to have enough grunge on its own, so rather than push it over the top, I chose to bring it out just a bit with definition and sharpening in Aperture. Brought the saturation up a bit to highlight the blue in the image, and burned the shadows to further define the space. It's quite a bit more subdued than a typical grunge image, but I like the results. 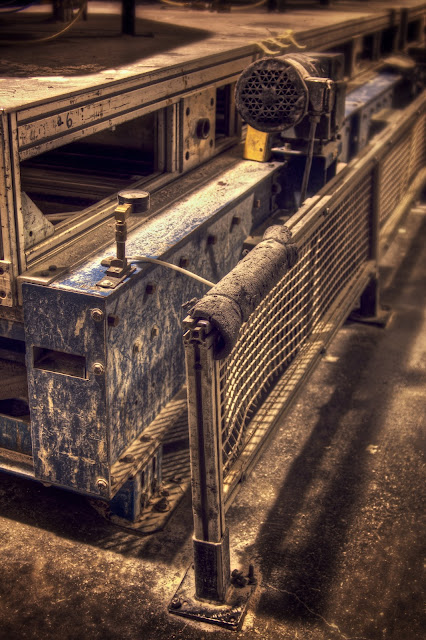 ROB HANSON﻿
I wound up altering this image more than I expected to when I first saw it. Being that it's already pretty grungy, I first thought I'd do some straightforward things to it, but new ideas kept popping up.
After basic processing and Shadowmapping, there still seemed to be a strong color cast from the originals, so I adjusted white balance and then neutralized the whites across the image. Using Nik Silver Efex, I did a subtle desaturation on the edge areas. To bring back some of the color, I used a soft gold reflector effect in spots, and used a rusty texture as an overlayer. Tonal Contrast always brings out the grit, Darken/Lighten Center focuses the eye where we want it. I was pretty happy with it and had even uploaded the final when I decided to straighten the lines using Photshop's Skew and Rotate functions, being careful not to overly distort some key elements, and that also served to highlight the subject even more.
Thanks, Jerry! It was a fun and educational experience to work on this set. 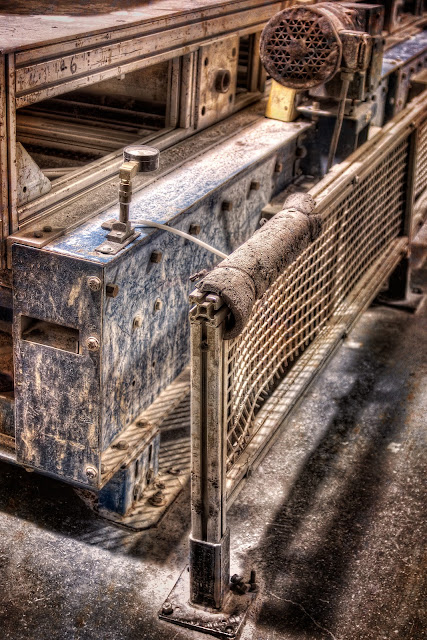 CHRIS NITZ﻿
What really caught my eye on this image was the blue metal. The overall image was already full of great grungy textures, but the blue metal just emphasized this dirty scene that much more. I ultimately decided to use this as a starting point for my processing.
I started off adding a lens blur to help draw the eye into the upper left side of this image. I then followed my normal style and added on a few texture layers. Finally I added a 1970's color overlay to help bring an antique feel that was compounded by a grungy overlay.
I really liked how, for me, this image revolved around the color and not a specific object. This is why I love the grunge collaboration! 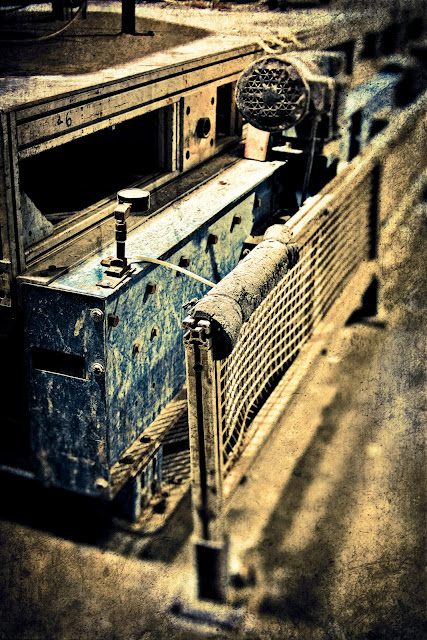 JERRY DENHAM﻿
Nothing says grunge more than old, worn machinery. The first thing I did was convert the HDR to black and white. This really intensifies the gritty dirt and shadows in the shot. I then turned up the shadows a little more to enchance them even more. I then tried to draw attention to the conveyor motor so I used some soft focus in the foreground to take some attention away from it. 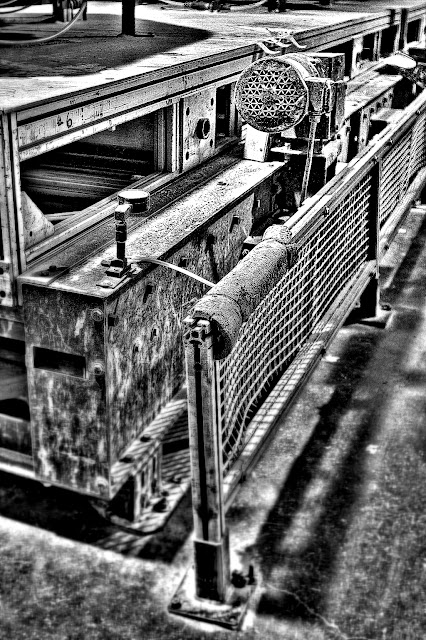 I really appreciate being able to collaborate with these great photographers. I have had a great time with all six of these projects and am very humbled to be included. Thanks guys.
Posted by Denham Photography at 6:17 AM